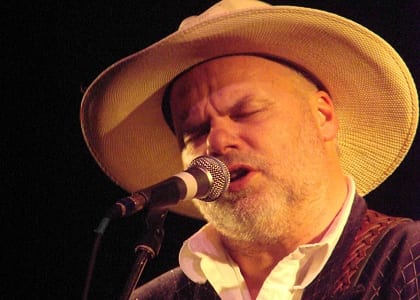 Award-winning and acclaimed performer, Fred Eaglesmith’s tales and observations are as keen and compelling as his songs, and frequently as hilarious as the best stand-up comedians. Fred’s 18th album is soon to be released; his previous albums over the last three decades have consistently evoked critical raves. His fellow songwriters regularly record his songs and sing his praises. He hosts a number of music festivals across North America, where he plays hundreds of dates a year in addition to touring Europe and Australia. His youthful travels hopping freight trains inspired the Roots on the Rails rolling music festivals, for which he currently hosts two annual rail trips that ride everywhere from scenic and historic narrow gauge lines in the American West to, this last year, into the Canadian arctic.

Through it all, Fred remains modest and resolutely hard working. He also gives generously of his time and talents to such causes as his own fundraising initiative to equip migrant farm workers with bicycles, reflectors and safety devices, Reflections, as well as being a spokesman, along with Bono and Alanis Morisette, for Oxfam’s Make Trade Fair campaign. He also does charity work for The Schizophrenia Society of Canada, The Fur and Feather Wildlife Center, The Equestrian Association for the Disabled, World Vision International and conservation efforts near where he lives in Southern Ontario. “I have the weirdest career in the world, a little tiny career that works so well,” Fred concludes of the artistic niche he has carved out for himself. “I’m just so lucky and so fortunate, I try not to take it for granted.”