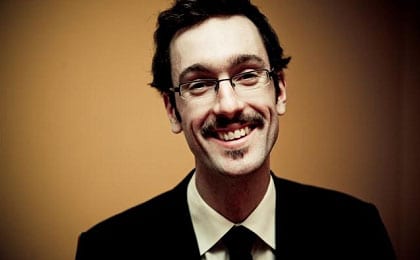 Songmeister David Myles does it all: smooth jazz, soulful pop, bluesy folk—yet he defies being tied down by these genres. His warm, personable presence combined with emotion-filled melodies and unique instrumentation has enchanted audiences wherever he performs.

A native of Fredericton who now works out of Halifax, Myles was voted New Brunswick’s choice for the CBC’s Great Canadian Song Quest. He won the 2009 ECMA Folk Recording Award. And he was a winner in the International Songwriting Competition last year as well, judged by the likes of songwriting legends Tom Waits & Brian Wilson.

And on the side, Myles wrote and recorded his 4th album, Turn Time Off, produced in collaboration with DRMF fave Joel Plaskett. His songs cut to the core of our lives; he speaks of human fallibility, of change, of being alive & in love, yet does so without being maudlin or sentimental. In demand and on the ascent, DRMF audiences are sure to be charmed by Myles and his music.