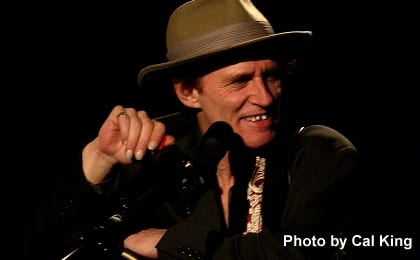 Ron Hynes is best known for writing the all-time classic “Sonny’s Dream” and is often referred to as the “the man of a thousand songs”.

Ron has won six East Coast Music Awards, a Genie Award, and has been nominated for JUNO, CCMA and Canadian Folk Music awards. He holds an Honorary PhD from Memorial University for his contribution to the cultural life of his beloved Newfoundland and Labrador, and is the recent recipient of the SOCAN National Achievement Award.

Deep Roots is thrilled to welcome Ron Hynes and will also be screening William D. MacGillivray’s “The Man of a Thousand Songs” – a documentary that follows Hynes on a darkly humorous, profound, and engaging journey of self-exploration. The movie premiered to sold out houses at the 2010 Toronto International Film Festival and includes powerful performances recorded live especially for this film.

Some would argue that Ron’s latest CD “Stealing Genius” is a misnomer. Stealing genius is not necessary for Mr. Hynes – he already has more than his share!

Sponsored by Sea Level Brewing Company (Friends of the Festival) A cultural fixture in Wolfville, The Dungaree Brothers began their musical career playing at the Anvil Tavern from the 1970s to the early 1990s. They then took a break from public appearances, using an old welding shed in Port Williams as their jamming headquarters. Since…

Early Bird Passes for Deep Roots Music Festival 2011 are available now till July 1st through Ticketpro for $80 (all fees included). Click Here to purchase on-line @ Ticketpro. Early Bird passes also get you in free to the Danny Michel concert at Evergreen on September 22! Not sure if you want to come to…

Sponsored by K-Rock, 89.3 (Festival Partner) Digging Roots ShoShona Kish and Raven Kanatakta front the band Digging Roots and won the 2010 Juno Award for best Aboriginal album with their latest recording “We Are”. Their music blurs the lines between roots, rock, hip-hop, and the blues and this has led to awards in multiple genres…

Sponsored by Paddy’s Brewpub and Rosie’s Restaurant (Festival Patron) With two Juno nominations and six solo albums to his credit, Danny Michel is one of the finest and most charming songwriters to grace the stage. He’s in his element during live performances, playing off the energy of the crowd; and his spontaneity, disarming sincerity and…