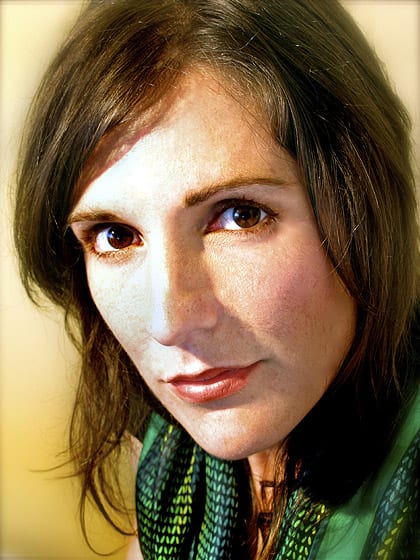 Georgette LeBlanc is a contemporary culture maker in her work as a multidisciplinary artist and educator. She is a dancer, an actress and a writer. Born in Pointe-de-l’Èglise in Nova Scotia’s Baie Saint-Marie region, she continues to live and work in that area. Georgette’s projects move through poetry, performance, humour, acting and theatre design, while winning numerous award nominations and prizes along the way.

Georgette completed her master’s degree on the evolution of traditional music at Université Sainte-Anne (BA 1999) and holds an MA (2003) and Doctorate (2007) in French Studies from the University of Louisiana at Lafayette, US, where she studied under the direction of the poet and Cajun ethnomusicologist Barry Jean Ancelet.

She has been a professor at Université Sainte-Anne, Nova Scotia since September 2007 and has hosted writing workshops in various other educational institutions. Georgette has taught creative literature and popular Acadian theatre, lectured and presented her own poetic work.

In 2010, Georgette LeBlanc was presented with the Lieutenant Governor of Nova Scotia Masterworks Arts Award. The jury noted that her original poetic works Alma (published in 2007) and Amédé (published in 2010) “present the Acadian communities of Baie Sainte-Marie, mainly from the perspectives of two memorable characters. Written in a simple yet vivacious and lyrical style, reflecting the “Acadjoune” speech of the region, these poem-stories move well beyond an Acadian folkloric cliché to attain a mythic ambience, and have been favourably compared with the work of Antoinine Maillet, Michel Tremblay and anglophone Nova Scotian writers such as Ernest Buckler and George Elliot Clarke.” Both books have become bestsellers in Quebec and the Atlantic region, and have won acclaim in poetry festivals in France, Belgium and Canada. Alma earned her the Prix Félix-Leclerc et Price Antonine-Maillet-Acadie Vie. In 2011, Georgette was awarded the Emile Ollivier Prize.

Deep Roots is delighted to welcome Georgette back as part of our 10th Anniversary festival, and to have her host our Cajun Heat show at the Rafters Heritage Barn, Old Orchard Inn on Saturday night. Laissez les bons temps rouler!