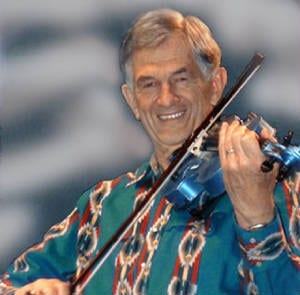 The Valley Arts Award is presented each year at the Deep Roots Music Festival to honour someone who lives (or has lived) in this area, and has made significant long-term contributions to the Arts in the Annapolis Valley.

We are happy to announce that Keith Ross is this year’s Valley Arts Award recipient.

To read all about Keith’s involvement and contributions to the arts … just one click and you’re there.

Keith Ross, a well-known Annapolis Valley fiddler and former instrument retailer, is the recipient of the 2016 Valley Arts Award.

Keith played in his first old-time dance band in Windsor in 1952. He continued playing with various bands until 1982, when he got tired of the bar scene and began concentrating on the fiddle. Keith recorded his first CD with fiddler friends, Bill Guest and Ivan Hicks, in 1982. In 1995, he recorded in Nashville with two of the world’s great fiddlers, Buddy Spicher and Vassar Clements, who made guest appearances on Keith’s CD Swingin’ Fiddles.

For over 15 years, Keith has been teaching fiddle, guitar, mandolin, bass, and rhythm piano. He also plays concerts and will be performing in a tribute to Merle Haggard at the Hants County Exhibition on September 24, 2016.   Twice a month, he plays with the Kings Fiddlers and you can hear him each week on the Atlantic Barn Dance Fiddling show on 97.5 CIOE-FM.

Keith will receive the Deep Roots Valley Arts Award during our final concert on Sunday, September 25 at Festival Theatre. He promises to bring his fiddle along.

For Immediate Release – June 30, 2016 WOLFVILLE, NS – The Deep Roots Music Festival is very excited to announce its line-up for 2016. The annual festival takes place September 22nd to 25th in Wolfville, Nova Scotia and surrounding area. This year’s line-up is well rooted in the Maritimes and boasts several new and interesting…

Have you been waiting, patiently?  impatiently? wanting to decide whether or not to buy passes  once you knew exactly what the weekend schedule looks like?  Well, now you can make your move.  The two page, downloadable schedule is ready.  The Festival is less than a month away.  As  mentioned before, ticket sales up to this point have…

Congratulations to all recipients receiving awards this past weekend at the Nova Scotia Music Awards Celebration in Truro, NS.  https://www.facebook.com/MusicNovaScotia/?hc_ref=PAGES_TIMELINE&fref=nf

Deep Roots Music Festival 2016 was a resounding success …  great weather, sold out shows,  and a general festive atmosphere all around town.    Just to name a few of the many highlights … Thursday night’s collaboration between David Myles and Classified gave many a new appreciation of rap music, the Saturday late night party…

The early bird 4 DAY FESTIVAL PASS is now available and if you have been holding back on buying a pass until the Thursday night concert was confirmed, you can now make your move. The Thursday, September 22nd, concert will feature Classified and David Myles in a special acoustic performance.   And lots more great…