Sponsored by: Just Us! Coffee Roasters 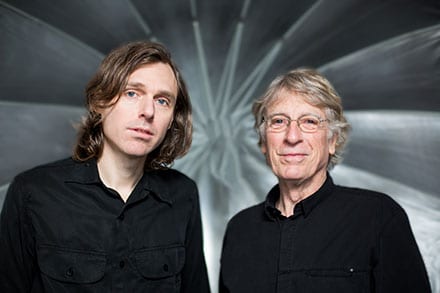 Many Canadian music fans know Joel Plaskett. Multiple JUNO Award winning songwriter. Multiple times on the Polaris Music Prize Short List. Sold out clubs and concert halls from one side of the country to the other.
But in 2017 he’ll be sharing the spotlight with his earliest musical influence- his father, Bill.

SOLIDARITY, released on the Pheromone label in February, is the first full-length musical collaboration between father and son. The album is a powerful collection of original and traditional songs, reflecting the duo’s individual journeys and personal politics.

From the introspective opening track, Dragonfly, a song about a paranormal experience that Joel had, to On Down the River, Bill’s closing track about leaving his home in England, the album is grounded in folk music but informed by rock and roll history.

Here’s Joel’s take on the title track: “As a starting point, I wanted to write a simple, folk song chorus that Dad and I could sing in harmony. The word solidarity came to mind as representing togetherness, strength and shared values. I wrote the song to celebrate unity, wherever you can find it, in an increasingly fractured world.”

Joel’s reference to a “folk song chorus” speaks to his father’s musical history. Born in 1945 in London, England, Bill spent the early 1960s playing tenor banjo (learned from his father) in a traditional jazz band and skiffle group and later graduated to playing electric bass in a high-school rock and roll band called Section 62.

In 1966, Bill traveled through the United States on a 99 days for $99 Greyhound bus pass. He immigrated to Vancouver, Canada in 1967 before moving to Nova Scotia where Joel was born in 1975. Through much of the 1980s the family lived in historic Lunenburg, a town transitioning from a fishing village to a tourist economy, where Bill played in an old time band called Starb’ard Side and helped found the beloved Lunenburg Folk Festival. Moving to Halifax in 1987, Bill immersed himself in the local folk music scene and watched with pride as his son picked up the guitar and eventually built a full time music career through the 90s with his first band, Thrush Hermit and more recently with his band, The Emergency.

“I’ve been impressed with the scope of the music Joel continues to make,” Bill says. “I’ve joined him on the road before, and it’s enjoyable traveling across the country and spending time together. On stage, I just play and pick up on the energy in the room that Joel is able to bring out of the audience with his charisma and stage presence. The upcoming tour to support this new record is exciting as it will be more ambitious and collaborative than anything we’ve done in the past.”

The 11 songs on Solidarity are varied and personal, yet expressive of interconnecting themes.
Folk-based political songs like “We Have Fed You All for a Thousand Years,”and “Jim Jones” sit side by side with contemplative love songs (“No Sight Compares” and “New California”), a touch of rockabilly country blues (Help Me Somebody Depression Blues) and more fully arranged folk rock songs of contemporary social commentary (“Blank Cheque” and “The Next Blue Sky”).

Solidarity is a surprising and unique album, full of strong guitar playing and thoughtful, accessible songs. An excellent addition to the Plaskett catalogue and hopefully the first of many for the Plasketts.

Deep Roots Festival is thrilled to have this solid duo come to our stages this year.