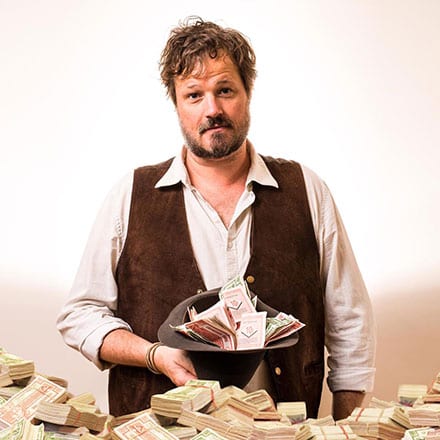 Toronto songwriter Corin Raymond’s love of words began in the car with his father, driving the endless jack-pined distances of Northern Ontario. His father would tell Corin Greek myths to pass the time, and for Corin, this began a lifelong love affair with words and stories that set him on the path to becoming an acclaimed songwriter and a student of songcraft. Corin has traveled the length and breadth of Canada and across the globe, and his songs are being covered by artists like The Good Lovelies, The Strumbellas, Jonathan Byrd, Dustin Bentall, The Harpoonist and the Axe Murderer, and many more. With Corin’s latest album, JUNO Contemporary Roots nominated “Hobo Jungle Fever Dreams,” he’s created his finest collection yet.

Recorded in Toronto in 2015, Hobo Jungle Fever Dreams was produced by Canadian guitarist/songwriter David Gillis. “I love his creativity,” Corin says about Gillis, “and I love his tenacity.” As well as turning to Raymond-regulars like Treasa Levasseur, Corin and Gillis found cameo support from the likes of Sarah Harmer, and Juno blues nominee Jason Nowicki (The Perpetrators). Gillis’s full-band arrangements and electrified textures are distinguished by Corin’s storytelling. Corin has an eye for the smallest details that carry the most meaning. In “Hard on Things,” he strings a litany of these details into an all-too-relatable confession: “I’ve worn out two gold wedding rings, ‘cause I’m hard on things.” With “Morning Glories,” Corin describes a fixture of Toronto’s Kensington Market: “He’s a pension cheque gambler, he’s a park bench instructor / he’s a bread crumb handler, and a pigeon conductor.”

A true Canadian troubadour, the studio work on Corin Raymond’s last project, Paper Nickels, a double-album hardcover book-packaged tribute to his fellow songwriters, was – through an absurd triumph of crowd-funding – paid for entirely with Canadian Tire money, handed to Corin by fans across the country. Raymond also has two non-musical, one-man, “storytelling” shows under his belt – Bookworm (2011) and The Great Canadian Tire Money Caper (2014), which he has toured extensively to over a dozen Fringe Festivals, literary festivals, and theatres in three countries.

In Corin’s mind, songs have their own instincts for survival. “I liken songs to dandelion seeds and things that are borne on the wind or that cling to the cuffs of your jeans. Good songs are like burrs. They will attach themselves to you.”

Deep Root audiences can look forward to a enlightening time with words and music when Corin comes to our stages this year.