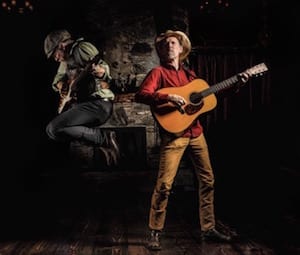 Jonathan Byrd is a preacher’s son, a Gulf War veteran, and an award-winning songwriter from Chapel Hill, North Carolina, known for literary, outsider songs that have become campfire favorites. The Chicago Tribune called Byrd “one of the top 50 songwriters of the past 50 years.”

Multi-instrumentalist Johnny Waken cut his teeth on electric guitar in Pittsburgh with rock legend Norm Nardini, opening for The Blues Brothers Band on their Red, Hot & Blue tour in 1992. On stage and after hours, he jammed with members of Bon Jovi and the legendary Steve Cropper. At the age of 24, Waken left music to pursue primitive skills and through-hiked the Appalachian Trail in 2000 with an eleven-pound pack. Returning to music years later, Johnny joined theatre troupe Paperhand Puppet Intervention, contributing to scores for nine shows and winning 4 Indy Awards for best original music.

Jonathan Byrd and The Pickup Cowboy are musical gunslingers, vaudevillian hucksters, and old-fashioned tent revivalists. Between heartbreaking ballads and hell-raising sing-alongs, the Cowboys entertain and get audiences involved in the show.

Sponsored by: Schoolhouse Brewery Roxy & the Underground Soul Sound, an 8 piece soul-funk band from Halifax, Nova Scotia, take the classic soul sounds of the 60’s and 70’s and put their own spin on the recipe of groove. The band lays down beats that are sure to set the dance floor on fire, making…

Scotty Marsters is a pillar of the Wolfville music scene. When he’s not playing lead guitar or bass, or singing background vocals in numerous other Nova Scotian bands, Scotty steps into the role of songwriter and lead vocalist in the Scotty Marsters Band. Backed by an eclectic mix of classical, bluegrass, and country musicians, the…

Sponsored by: Just Us! Coffee Roasters Many Canadian music fans know Joel Plaskett. Multiple JUNO Award winning songwriter. Multiple times on the Polaris Music Prize Short List. Sold out clubs and concert halls from one side of the country to the other. But in 2017 he’ll be sharing the spotlight with his earliest musical influence-…

Sponsored by: The Flower Cart Group Naming the Twins is the Nova Scotia based, harmony rich duo of Robbie Smith and Kath Glauser, whose vocal blendings sound a bit like Simon & Garfunkel, if Art was a girl, a bit like Peter, Paul & Mary, if one of the boys was taking the night off….

Sponsored by: Jane’s Boutique Alex Cuba is a Latin Grammy/Juno winner, singer-songwriter who is not tied to tradition; Alex has a vast musical vision. His sugarcane-sweet melodies, pop-soul hooks and powerful guitar riffs, relinquish a conventional stereotype that exemplifies much of the Latin music landscape. Born Alexis Puentes in Artemisa, Cuba, was immersed in music…

Sponsored by: Boston Pizza Toronto songwriter Corin Raymond’s love of words began in the car with his father, driving the endless jack-pined distances of Northern Ontario. His father would tell Corin Greek myths to pass the time, and for Corin, this began a lifelong love affair with words and stories that set him on the…