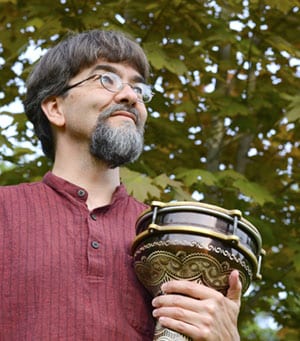 The Valley Arts Award is presented to someone who has made a significant, long-term contribution to the Arts in Nova Scotia’s Annapolis Valley. This year’s winner is Ken Shorley – a diverse percussionist who specializes in the hand drumming traditions of the Middle East and India. Though he’s been based in Wolfville for over 20 years, his musical passions have taken him around the globe. Ken is also an avid player and teacher of Indonesian gamelan music. His ensemble, Mindful Flower Gamelan, is the first of its kind in the Maritimes and performs traditional and contemporary music for gamelan degung. The group’s first recording, featuring new gamelan music by Canadian and Indonesian composers, is currently in post-production.

In recent years, Ken has been a featured performer at the Halifax Jazz Festival, Sound Symposium, Prismatic Festival, Lunenburg Folk Harbour Festival, Sunfest, Mosaiq Festival, here at the Deep Roots Music Festival, and on national broadcasts for CBC Radio 2. Ken is also the co-director of World in Wolfville, a community organization that has, for more than 10 years, focused on presenting world music concerts, workshops, and happenings in the greater Wolfville area. (Watch for a return of their popular “Drum Night” happening this November!).

Ken will receive the 2017 Valley Arts Award at our Festival Finale on Sunday.

This year’s Deep Roots Music Festival  two page, downloadable schedule is now available.   If you have been waiting to buy tickets until you had more specific details, the time has arrived!  Check it out.  Download it.  Make copies.  Pass along the good news.  Pass it along to friends. Put it up on your fridge….

Tickets to individual shows are now available.   Head over to Ticketpro for tickets and/or 3-day or 4-day passes which are also still available there. Shows, especially the main stage, do sell out so don’t wait!  Buy your tickets or passes now.

Deep Roots Music Cooperative is thrilled to be bringing Port Cities back to the valley as part of their album release tour.  If you didn’t get a chance to catch their amazing performances during this past year’s Festival, you have another chance.   March 2, 2017, 7:30pm, at the  Al Whittle Theatre, Wolfville Tickets are available now online…

With a music career  spanning three decades, generating 9 studio albums and garnering multiple CCMA, Juno and industry awards, Corb Lund is a force to be reckoned with and Deep Roots Music Cooperative is thrilled to be bringing him to the Festival Theatre, Wolfville, on Sunday, April 30th.