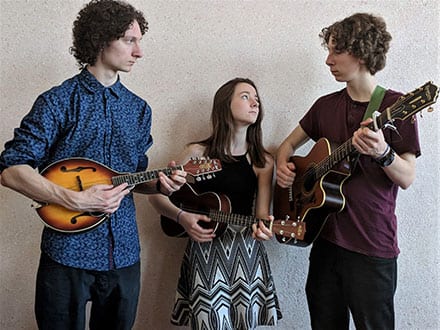 It’s 2003.
Three kids, knee-high to a grasshopper, emigrate from the UK to Canada and settle with their music-loving parents in rural Nova Scotia. They are given three soprano ukuleles – Frieden gets the brown one, Reuben gets blue and Maisie – red. Strings buzz and zing and before long – there is music. Onward! Enter excellent teachers in the public-school music program who enthuse and encourage. Frieden picks the trumpet, Reuben the tenor sax, Maisie the alto sax and flute. Reuben discovers guitars and goes to his room – emerging some years later as a bodacious player.

All three Gilberts join the Annapolis Valley Honour Choir and now they are singing big time. Summers bring open mics at festivals. Close three-part harmonies are becoming part of their signature sound. Join the Acadia Youth Band. Frieden gets a theremin. Reuben picks up a banjo and puts down a mandolin. Frieden picks up the mandolin. Maisie is singing, singing, singing. Invitations to perform at community halls, fund-raisers, house parties, coffee houses and concerts arrive. Looks like we have ‘a band’. Better come up with a name. Go with ‘The Gilberts’ – well it’s accurate! Need original material now. Songs are teased, argued, massaged and collaborated into existence. Soulful lyrics and folk roots. People seem to like them – “Do you have a CD?”